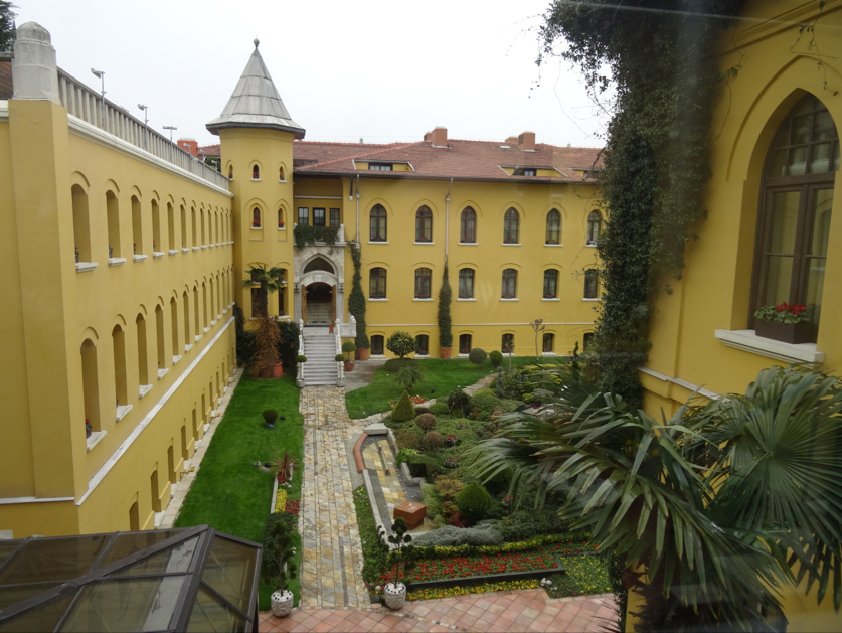 Checking into a 90-year-old Turkish prison never made it onto my bucket list. Particularly a prison that was purpose-built to house dissident journalists.

But these days, the once dour Istanbul fortress known as Sultanahmet Cezaevi, has become one of the prime hotel addresses in the world, thanks to a painstaking two-year restoration of the notorious prison by the world-renowned Four Seasons Hotel and Resort Chain.

Now every visitor to Istanbul wants to be “locked away” in one of the 65 luxurious rooms featured in the intimate Four Seasons at Sultanahmet, which has quickly become one of the jewels in the four Seasons’ crown.

Originally built in 1918, the Sultanahmet Cezaevi became synonymous with horrific tales of inmate mistreatment and was finally closed in 1969. Author Graham Greene even featured the prison in his 1932 thriller, Stamboul Train.

It quickly fell into disrepair after its closing and became an eyesore in Istanbul’s Old Town until Four Seasons came to its rescue.

The Toronto-based hotel chain, in collaboration with Turkish architect, Yalcin Ozuekren and interior designer Sinan Kafadar, have transformed the old slammer nestled between some of Istanbul’s most prized UNESCO World Heritage Sites – the Blue Mosque, Hagia Sophia and Topkapi Palace – into a 21st-century treasure.

The Four Seasons at Sultanahmet is a stunning example of Turkish neoclassical architecture, which combines Ottoman and Western influences in an attempt to meld a contemporary structure into its historical setting.

Arriving from the airport, our taxi wheels into a narrow street, which is still called the House of Detention Street. Pulling up to the front entrance of the sunflower-yellow building, my husband and I are greeted by a doorman who, having been alerted of our arrival time, welcomes us by name. This would be just the first of the special Four Seasons’ personal touches we experience. I try to imagine what kind of armed-guard greeting Nazim Hikmet, Turkey’s famous poet and a previous “guest”, would have received.

Inside the prison’s original, massive, wooden doors, a multiple-arched hallway opens onto a series of intimate sitting rooms, once the meeting areas for lawyers and their jailed clients.

The architect’s intent to preserve as many of the decorative elements of the prison as possible can be seen in the high ceilings, marble pillars and floors with mosaic inlays, while native wood, wrought iron and hand-woven Ottoman tapestries showcase Turkish craftsmanship. The result is a thoroughly modern, sophisticated hotel that incorporates Turkey’s history and traditions.

The three-story structure wraps around an intimate courtyard – formerly the prisoners’ exercise area. Today it is a beautiful garden surrounding Seasons, the glass-enclosed restaurant. In warm weather, an outdoor terrace is the perfect setting to enjoy a romantic dinner or the sumptuous meze-style Turkish breakfast that the hotel hosts every Sunday.

Tearing down walls between former cells resulted in the creation of spacious guest rooms and suites where modern expectations such as flat screen TV and automated blackout blinds marry easily with the beautiful neoclassical décor.

Michael Purtill, hotel manager, tells us that our corner, multi-level suite originally housed the prison warden. The marble-clad bathroom with its soaker tub, I am certain, would have been beyond the warden’s wildest dreams. Floor-to-ceiling windows and a little Juliet balcony look out onto an historic café-filled alley, from where we can listen to the daily Muslim calls to prayer.

Some of the guest rooms provide a front-row view of two of the most famous buildings in the city – the Blue Mosque and the Hagia Sofia with its onion domes.

Istanbul is a glorious city, steeped in history, layered in culture and notorious for its clogged streets, endless traffic jams and taxi hassles. Given the hotel’s choice location, we are able to enjoy the ultimate Istanbul experience on foot. We walk everywhere. To guide us through the ‘must see’ places, we hire Fatih Copuroglu, who has worked as a professional tour guide for the past 20 years. Knowledgeable, congenial and able to jump the lineups for tickets, he brings the city to life for us.

We tour Topkapi Palace, home (and harem) of the Ottoman sultans, Hagia Sophia, the largest Christian church for more than 1,000 years, Sultanahmet (or Blue) Mosque with its six minarets and blue interior tiles. And we top off the afternoon with a visit to the Grand Bazaar – the ultimate medieval ‘shopping centre’, where we could spend the entire day and not see all of the 4,000 shops.

After this kind of exhilarating yet exhausting day of sightseeing, Four Seasons Sultanahmet offers a soothing haven – the perfect place to escape to, not from.